Happy Birthday Hurtle Turtle! I’m just passing along my good wishes to the birthday tortoise. So says Hurtle Turtle: Celebrations! ($1.00), Holmade Games’ third entry in the series, a simultaneous party and level pack for the endless runner ahead of a planned sequel coming later. So, not really a new entry, per se. That makes this version 1.3, or something. 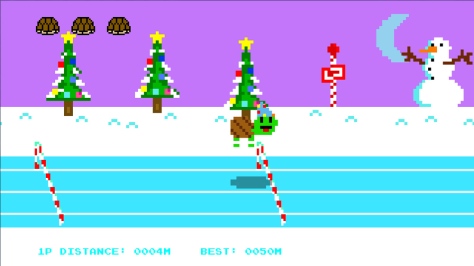 Why release a trio of holiday-themed levels now, when it could just as likely have been included in the first level pack, or the original game, or even held back to be included in the future sequel? I’m not sure. It’s not as if the ‘Endless Runner’ genre has much more room for originality or fresh mechanics. Front-loading an official sequel with extra stages right out of the gate seems like a better plan than charging separately for what amounts to more of the same.

To be fair, maybe you enjoy these types of games. Level pack or not, it should be judged by how it plays, not the surrounding story. Even by runner standards, though, Hurtle Turtle is completely safe. Its controls are simple, and it doesn’t ask much of you, only to slide up and down to avoid hazards and jump over any obstacles you can’t move out of the path of. Speed increases the higher the distance traveled, you can take four hits before you‘re shell-shocked, and… That’s it. No big fuss.

Celebrations! comes with three stages, the obligatory Halloween / Christmas levels, and a track featuring oversized gifts to trip you up. Festive indeed. There’s changing art to hop over, and the backgrounds scroll, though that’s the extent of the tricks in the game’s bag. Essentially, one run through the demo stage gives you all you need to know. 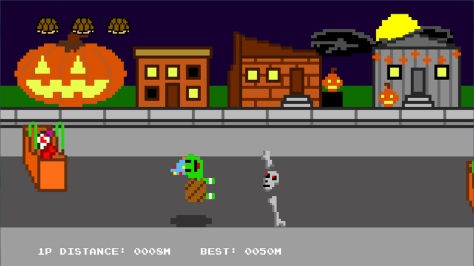 Three static stages and three candles on a metaphorical birthday cake aren’t enough to justify Hurtle Turtle: Celebrations!’s price. I can appreciate its past, and I do wish the little guy the best in his future endeavors (part two is tentatively scheduled for later this Fall), though this pat-myself-on-the-shell congratulatory release is nothing more than a cheap cash-in.