Alien OverKILL (80 MSP, and yes, I’ll capitalize the latter half of the game’s name once as the developer does, but I refuse to accentuate it unnecessarily from this point on) is a first-person shooter in the style of an early Doom or Wolfenstein, replete with the same-y corridors and heavily-fogged environs that characterized the genre at its birth.

Much like those games, the story is relegated to a few lines of inconsequential text. All you need to know is that something somewhere went wrong, aliens have overrun everything, and you need to right it with the business end of your gun. Stages are open and free to explore, but there is no exit or finish line. Instead, you’re instructed to hunt down a set number of aliens roaming the claustrophobic halls of a space station, and clear the infestation level by level.

Disembodied female screams and ubiquitous electronic paneling give it that familiar early-90s, low-rent sci-fi horror feel, which is sometimes a nostalgic bonus. Here, it serves only to visually dull the senses, as each corridor and level blends into the next. Combined with the fogging / already dark levels, this makes backtracking to find stragglers (your Alien-esque radar charts nearby enemy movement) or sort out where you’ve been more frustrating than need be.

The gunplay too, is competent, if uninspired. The old standby rifle and shotgun feel solid enough, and aiming is responsive. Really though, you could swap either out without noticing a change in effectiveness, regardless of range. Not that you should get too close, as it’s silently hazardous to your health. There are damage indicators, but they’re subtle (as are the enemy attack animations), making it difficult to know when you’re being drained of life. This is partially offset by health pickups and an unlimited number of continues that don’t reset progress or otherwise harm you, but the annoyance is enough to mention. 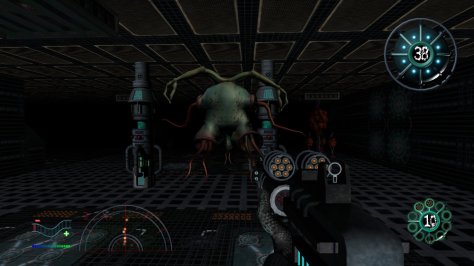 For extras there’s Gestation mode, which carries over the pea-soup fog and so-so combat from the campaign, that features respawning enemies and a running clock that adds time with each alien destroyed. At best it’s a quick one-off you’re not likely to revisit. And while it’s evident in the story levels, here you’ll notice the framerate dip at times when too much is happening onscreen.

These little marks against it all add up, which is unfortunate given the rather excellent FPS controls and handling. With a more focused design and gameplay that feels less like a glorified shooting gallery, it could have been much better. Purists may love it, but as is, Alien Overkill makes for one boring bug hunt.