Never has a game inspired the barest minimum of wording from me as Gory Cyber West (80 MSP) has. More due to the distinct lack of any new, worthwhile games to play than a burning desire to see it through to its thankfully short end, it nets a review here simply by being at the right place of the new release list at the right time of release.

When somebody puts their dialog box right on top of your face, you are most definitely not welcome.

Essentially a series of bad cyberpunkesque clipart shuffling towards each other in front of a poor, static caricature of the Wild West, Gory Cyber West is loosely-defined as a ‘duel’ between two people, if pressing the trigger once the ‘Wait For It’ text disappears from the screen accounts for what you’d label a duel. I’ve had bowel movements that are a more challenging battle of wits.

The story consists of a baby in some type of ‘adult cybersuit’ (don’t ask how that same suit allows the baby to talk), dueling through a cycle of nine archetypical bad guys (and one woman). There’s no variance from one fight to the next other than a quickened reaction time by the AI, and a new unfunny one-liner from your next opponent to break the ice. At the end, you and your final sparring mate reach a draw and agree to buy each other a round of drinks, somehow negating the fact that you murdered all of his friends just a few minutes prior. 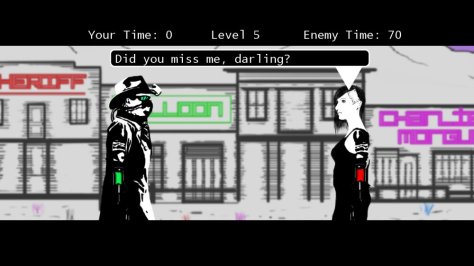 Not then, not now, not ever.

Sure, there’s an arcade setting (that extends the pain of dueling to twenty-five opponents) or a two-player mode (friends don’t let friends play this), but the less time spent in Gory Cyber West, the better. I’m sure you can think of something, hell, anything, better to do when even an actual duel, with the very real threat of death, would be more preferable. Don’t waste your time or dollar here.