There’s quite a few things in life that I dread doing. Public speaking, tax preparation, jury duty, dentist appointments, to name a few. Reviewing another zombie wave shooter is a recent inductee to that list. There’s just… there’s just so many of them. Deserved or not, The Co-Op Zombie Game (80 MSP) caused a reflexive sigh upon startup, another dreaded event I’d have to man up and tackle. 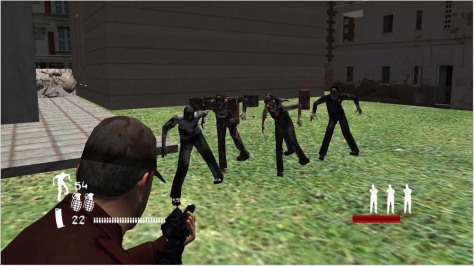 Turns out that’s being a little too dramatic, and I have since rescinded my sigh. Moving on. It’s not fully intentional, but Strange Games Studios’ newest bears a striking resemblance to The $1 Zombie Game, a bizarrely-popular (and I’m stressing ‘popular’; I still don’t get the fascination) wave shooter that staled after ten minutes (yes, in my opinion). The Co-Op Zombie Game adopts the literal naming both for ease of recognition and truth in advertising. Your assumptions are correct; it’s all about battling the undead, and supports up to four players online.

Though the game promises almost twenty levels, it is, in fact, one sprawling piece of real estate, broken up by piles of debris that transfer you from one area to the next. The layout runs from narrow lanes to open intersections, with plenty of room for a party of four to spread out and cover their respective ground. Things will start to look and feel a little same-y and sparse, but there is a definitive design for each stage despite the reused urban environment. Monotony is held at bay with some handy explosive barrels and ammo / gun crates, giving the level some much-needed interactivity and you a reason to explore every nook and cranny.

Your starting pistol aside, you are saved from ‘wave shooter fatigue’ by the chance of finding new and stronger guns (shotguns, assault rifles, and scoped variants). The game graciously allows you to carry two weapons at once, with the ability to swap out whenever you happen upon a better situation. Ammo is generally plentiful, though melee weapons can bypass the trouble of reloading in a tight spot, with the trade-off of being up close and personal with your attacks. You’d do better to equip two guns, though, as the amount of zombies in each wave predictably increases as you go along. 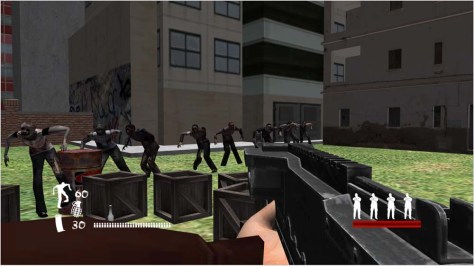 Online co-op or free-for-all modes also take a potentially pedestrian task to a higher level, making the game far more dynamic and fun whether you’re playing with or against friends / strangers. Cooperative’s rule set is the same as solo. Free-for-all makes everyone a target, zombie and human alike, fighting towards a preset score with extra points awarded for killing other human players. While there are a few minor hiccups and inconsistencies (players passing through walls / barriers, for instance), overall, the matches I encountered were solid.

There isn’t much new to the formula here, though the environmental interactions and online play carry what otherwise would be a standard zombie vehicle. With a full party, The Co-Op Zombie Game is good fun. It means well, plays well, and ends well. That’s probably the highest praise you can get from a wave shooter cynic like myself.