Taken by itself, Fanny Granny’s Great Escape (80 MSP) is an unfortunate name that will probably scare off a few demo-downloaders before they ever hit the trial. And that’s… well, unfortunate. It’s goofy, has the surrounding air of a joke title, and so, by extension, it must be a joke game, featuring all sorts of ridiculous bugs and shoddy gameplay. But it doesn’t. Fortunately, it’s quite the opposite.

And therein lies the fun / challenge, jumping cars and triggering bonus food (boost) and item (score) drops. The goal is to avoid an accident, of course, though you are rewarded for near-misses. Splitting the hair-thin gap between a line of cars will give you the highest bonus and net you much-sought-after ‘boost’, which will utilize Grandma’s unique, built-in nitrous oxide (…It’s a fart, okay. Grandma will fart, and go faster).

The game is governed by these speed boosts and divided by checkpoints that only tolerate so many mistakes. Spread across four difficulties and one, never-ending stage (varying backgrounds and custom soundtracks break up some of the monotony), it’s all about high scores and keeping Granny on the move. 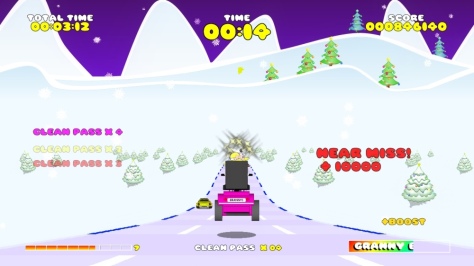 There’s a few negatives you could bring up, chief among them the repetitive racing cycle. While backgrounds and the track are swapped every few checkpoints, the single mode / objective set is primed to stale. And it will. No online leaderboards hurt that replayability further, making the game something that is best enjoyed in small doses.

Fanny Granny’s Great Escape may be a ridiculous title, and it’s not much for maturity once the car gets rolling, either. Yet, for a pick-up-and-play racer that still demands some skill, it’s a competent, albeit gassy, ride.