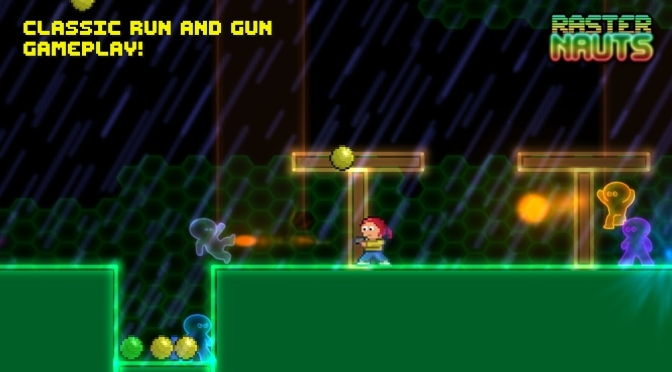 It’s comforting to know that the whole reason we have games like Rasternauts (80 MSP) is entirely thanks to engineers and brains in labs everywhere still refusing to listen to and abide by the most basic of scientific caveats; you do not meddle with things you do not understand. Yet here we are, throwing atoms at each other in giant underground tunnels in Switzerland, and I can’t sleep.

Thankfully, Rasternauts’ folly is less damaging to my sanity, being a fictional game and all. Scientists are still at the center of it, though, tearing a hole in their universe straight through to a world of neon vectors and baddies. Naturally, this meeting between universes is not met with friendly handshakes and information-sharing. Your pixel friends are abducted by these vectors, and you’ll need to run & gun through 30+ levels to rescue them and set things back to a pixel-perfect present.

You can select from four characters, each with their own armament that plays slightly different depending on your style. This seems to put the game squarely in the shooter category (comparisons to Contra / Metal Slug have been made), though there’s more than a fair share of platforming going on here. Traversal mixed with some stop & pop is the general idea, as each stage has a specific number of separated scientists to save, and doesn’t end until you do so. Boss fights and a good amount of variety in the level design keep things moving.

Player Health is governed by crystals, dropped by enemies and found within the environment. These pull double-duty, upgrading your weapon (there are additional powerups to be found as well) and keeping you alive, a la Sonic the Hedgehog. When you’re hit by the vectors or by incoming fire, your ‘crystal bankroll’ is scattered, leaving you a few seconds to gather up as many as possible. So long as you have at least one in your possession, you’re okay. Without, well, you know.

And much like the Sonic games, threats abound in Rasternauts. While you can fire in all directions, or hold position and fire, even on ladders / fencing, it’s not nearly as perfect or convenient when you’re surrounded by enemies. I was tossed to my doom plenty of times by bullets coming off-screen and hitting me just right. In fact, the game borders on ‘Mega Man levels’ of difficulty, less about enjoyment and more just sheer determination to see it through, avoiding the constant hazards and respawning (…ugh / sigh) enemies.

If you’re in the mood for old school design (and the requisite frustration involved), then Rasternauts is your game. If you were expecting something a little more forgiving, don’t. That doesn’t cancel out some of the fun and humor Rasternauts generates, but it does give it more of a punishformer vibe than the visuals indicate. Proceed with caution.