The description asks if I ever wanted to be like my favorite music artist or sports hero, and, specifically, go to the club and ‘make it rain’? Wait, isn’t it a little presumptuous (and more than a little condescending) to say that all athletes and musicians frequent strip clubs? Some learn to play the piano, or start a charity foundation. But I digress! Do I like to ‘make it rain on ’em’? Ladies, you better pack an umbrella. It’s like developer 24kt_Studios read my perverted, grade school mind and dropped me off at the corner of Yes! and Hell yes! It’s too bad I’m being completely sarcastic, as Make It Rain panders to the lowest common denominator of gaming: stiffly-animated women dancing on a digital pole, for you to throw digital money at. Thanks, Fat Joe! 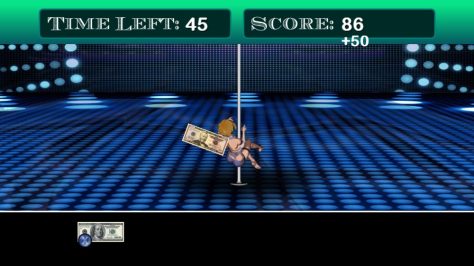 Grant and Franklin, they know the drill.

There’s an old, old world saying that I’m going to paraphrase, that goes something along the lines of ‘never anger or get on the bad side of women that take their clothes off for a living’. I’m sure that saying didn’t have the foresight to see something like Make it Rain, so it doesn’t apply to videogames and I should be safe from their ire. The game is utterly ridiculous / terrible (ridicurrible), a series of button presses to match the on-screen currency, for a minute. Wow. I never thought I’d play a game that makes the Team Shuriken catalog look like high art that should be hanging in the Louvre. Odder still, while the theme of the game is heavily ‘visual’, you’ll spend most of your time watching the money / button combinations instead of the women. Probably just as well.

Choice amounts to which girl (of a possible four) you have dance, and is nothing more than a color palette swap and an individual biography, as if character development and background was really important to get right here. The ‘dance’ itself is the same few looped frames of animation regardless of choice, punctuated by cat calls and brief, weird, sexualized moans only slightly less creepy than the whole of The Houchi Play, which at least was entertaining. There’s nothing sexual about it here, however, making it just weird. Certainly not something you want to advertise with whatever sound system you have, as it’ll draw some questionable glances from anyone you live with. 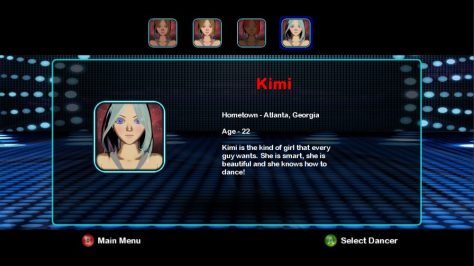 Everything starts with a good backstory.

Call it a case of ‘I should know better’ (and really, we all should know better), but there’s absolutely zero to like about Make It Rain. It’s insulting to both sexes, stretches the definition of ‘videogame’, and I feel dirty and infinitely more stupid after playing it. There’s a dollar and ten minutes of my life I won’t ever get back. Make It Rain? No, I Make It Delete, straight off of my Xbox. Take us out, Joe.

11 thoughts on “REVIEW: Make It Rain”