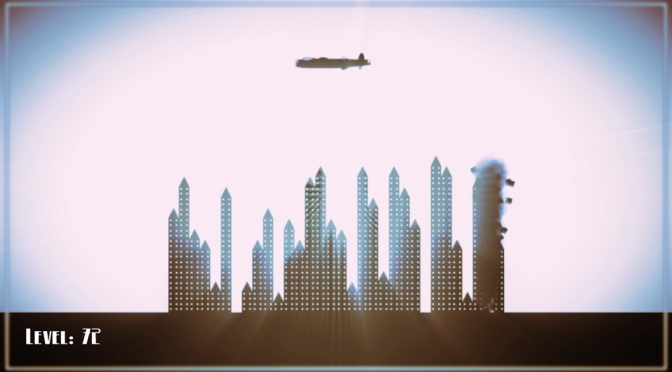 If considered as a historical project or artistic piece, The Blitz (80 MSP) would fail to engage; its setting is twenty years too early to reference the wholesale bombing of Britain by the Luftwaffe, and I sincerely doubt UK readers can muster up any warm and fuzzy feelings regarding that time in history. It was a terrible event in a longer chain of terrible events, bookended by even more terrible events, as wars always are.

This isn’t meant to turn into a downer of a review though, as of course we’re here to talk about videogames. The Blitz isn’t a treatise on the horrors mankind is capable of, it’s an extremely easygoing arcade title that’s almost exactly the same as the C64 classic, Super Blitz. If the idea of building demolition, set to a jazz / piano soundtrack, has a calming effect on your nerves or sounds like an ideal vacation, The Blitz may be heaven-sent. You’re also a pretty strange guy / gal, but hey, no judgment.

Simplicity and silhouettes are the running theme, as the only button you’ll use is the ‘A’ button. Playing as bombardier, you’ll work to destroy cities of varying size and height against a color-changing background using distinct lighting and a graphical style that will be seen and put to much better use in the studios’ forthcoming Dawn of the Ronin.

The Blitz has no enemies, no penalties, no limit to the amount of bombs you can drop (on a delay) or stages, and no score is kept. Your plane will fly from left to right, right to left, and you will time your releases to level the field. That is all. Of course, the difficulty rises with the stage number, giving you more targets and / or taller buildings that threaten your flight path (the plane dips in height with each pass you make), though it’s generally low-impact gaming.

Even with that relative ease, I would have liked to have seen a fast-forward button for speeding along the process. The game has a few ‘last brick syndrome’ moments with stubborn buildings, extending levels longer than need be thanks to a slow plane and turnaround time. There’s no stage select or saved progress either, meaning you’ll need to play through the whole thing (a slog) each time to reach the more difficult urban layouts.

The fact that there’s very little here makes it tough to grade. You’re better off passing if you’re looking for something a bit stronger and more involving, as the downtime between bombing runs and the bombing itself will start to feel like watching paint dry. If you’re in the mood to watch the world collapse and burn down around you with as little pressure and commitment as possible, though, The Blitz fits a very specific need.

27 thoughts on “REVIEW: The Blitz”