Whatever side of the fence you sit on regarding the sequel, arguably some of the best moments in the contemporary Tron film were the visually-impressive light bike scenes early on. While this was recreated (albeit competitively) in the videogame companion, Tron: Evolution, indie developer Retroburn Game Studios is taking its stab at the idea and adapting it to XBLIG (and others), in a more racing / puzzle form, Positron.

The above trailer shows off the gameplay, which will have you navigating a series of corridors, avoiding walls (and your own light trail) to find the right path to the goal. In addition, you’ll notice some snazzy camera angle options that may (or may not, the developer is undecided on their inclusion) open up once you’ve completed a stage.

Pretty (really, really pretty) graphics and intriguing concept aside, it remains to be seen whether Positron can extend the fun across an entire game, or if the search for the exit becomes more trial-and-error than genuine exploration. There’s still no sign of Olivia Wilde, either, but I have my fingers crossed it will all work out in the end.

Positron will see release soon (this summer). To stay informed on the game’s progress, and its porting to numerous platforms, follow the developer here. 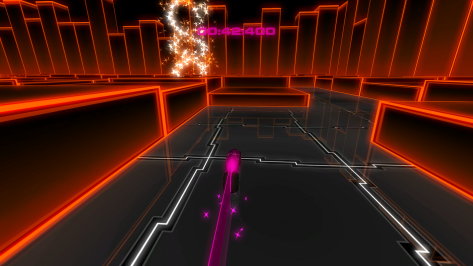