Distilled down to its purest form, JamSouls! (80 MSP) is a bargain bin version of Playstation All-Stars / Super Smash Bros., minus the recognizable console mascots. Also minus looking or playing anything like a bargain bin game. You could be forgiven for thinking otherwise, as its visual splendor and price tag hide what really is a solid, dynamic, pestilence-themed arcade brawler.

JamSouls! is the literal result of opening up Pandora’s Box (well, here it’s a Bottle, as it originally was), even though it very clearly states Do Not Open / Ne Pas Ouvrir. Lucky for you (unlucky for mankind), she does, and out pops a ‘Who’s Who’ roster of evil. You’ll pick one of nine cute, yet disturbing, avatars representing all manner of very bad things (Death, War, Starvation, etc.), then battle it out in several arenas. Is it right for me to group together and label all the known evils of the world as ‘cute’? I don’t know, but I definitely want one of these babies on my shelf.

Playable locally against three friends, or versus the very adept AI, the game follows a strict motto: paths cross, chaos ensues. Like Ninja Crash before it, having the high ground is essential. There is no health bar or shield; if you get bopped on the head, you die and respawn. You have your free-for-all Deathmatch standard, which is nonetheless exciting, and an equally fun ‘Capture the Goo’ (derivation of ‘flag’) team mode, which has you pilfering the red / blue substance from your enemies’ corner and transporting it back to your own jar. There is a third ‘party’ mode that has you kicking a ball into a basket or goal, a Basketball / Soccer (for us Yanks, yes, ‘Football’ for the rest of the world) hybrid that’s only available with human opponents (sucks for us ‘forever alone’ types).

Regardless of mode, outcomes are never set in stone even with the easy conditions for victory, thanks to the constantly shifting level hazards and powerups that litter the arena. This keeps battles moving and interesting, with items that will have you flying over everyone, shrinking the competition, or using projectiles to create space. Gathering up enough ‘soul goo’ during a round gives you a super-powered form of your chosen evil, granting you a one-touch kill ability for a limited time. If you can cheat Death (both in the literal and general sense) long enough, this can certainly swing a fight your way in the waning moments. 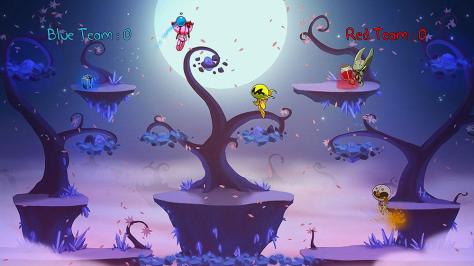 Looks even better in motion.

Sometimes it’s the simplest ideas that take hold, swallowing your hours with you none the wiser, and JamSouls! is exactly that. With its gorgeous arenas, excellent soundtrack, and wholly original character art, the game is a sumptuous feast for the eyeballs and earholes that’s also destined to become a frenzied bop-’em-up classic.