If there was one thing in high school that was peddled to me in abundance, it was the King Arthur legend. What extra significance that had for students of the American Midwest in the waning years of the twentieth century, as opposed to, say, ‘The Catcher in the Rye’, or ‘Animal Farm’ (books I had to find and read on my own outside of class), is beyond me. The Powers That Be in public education (surely?) must have had a plan behind the curriculum, or perhaps fate could one day find me freeing a very nice sword from a very stubborn stone. Who can say?

What I do know, is Path of King Arthur (80 MSP) is a very loose re-imagining of the tale, unless Camelot was actually defended ‘tower defense’ style by frontline units comprised of cats and dogs. I’m no historian, but I have my doubts. Sadly, those events would be infinitely more appealing to debate than playing out the theory in-game, as Path of King Arthur will quickly bore you into submission.

The tower defense aspect, despite a sizable array of units ranging from infantry to cavalry, healers and archers, to ‘unique’ options like knights from the Round Table, is done purely by the book (no pun intended). Units are introduced every few levels through some rather funny dialogue and backstory (Princess Guinevere’s bio is particularly accurate), and then you’re free to enlist soldiers with money earned during battles. Strategy and personal preference will guide your purchases, designing your army to meet the challenges (beasts and bandits) in each stage.

Playing as King Arthur, you can move about the level, using simple twin-stick controls to attack enemy forces while opening and closing ‘gates’ in the play area to funnel troops and adversaries where you please. Flipping these gates becomes quite important early on, as levels typically contain hazards that you must work around, including fire-tossing towers and spikes.

Unfortunately, the whole thing plays low-grade, and the ‘cutesy’ graphics / lack of battle animations sap the potential enjoyment. Money is usually tight, and there is a cap on the number of units you can have on the battlefield at one time, too, so there’s no way to simulate an unending feline army overrunning everything (…I have strange dreams). And though the idea of ‘gates’ is a sound one, especially in using hazards to thin the enemy herd, the AI isn’t incredibly bright. You’ll likely kill off just as many friendly units without an effective way to manage their movements. 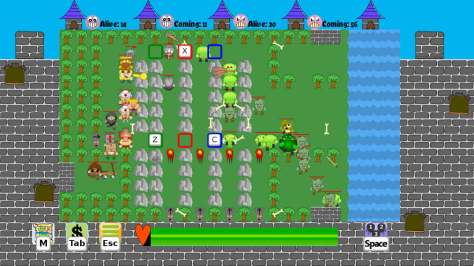 As such, stages regress to finding (via trial and error and retrial) which units will cancel out the opposing side. Needless to say, this grows tedious, and the level design (more or less repeated throughout) fails to effectively maintain your interest, despite the fact that there’s 50+ stages to play through. The value is certainly here, the fun is not.

The finest parts of Path of King Arthur are in its dialogue and storytelling, which allow you to forget, only very very briefly, that you’re playing a sub-par, watching-paint-dry, tower defense / twin-stick combination that has little in the way of fun or engaging gameplay. Pass on this game and read a book instead, kids.