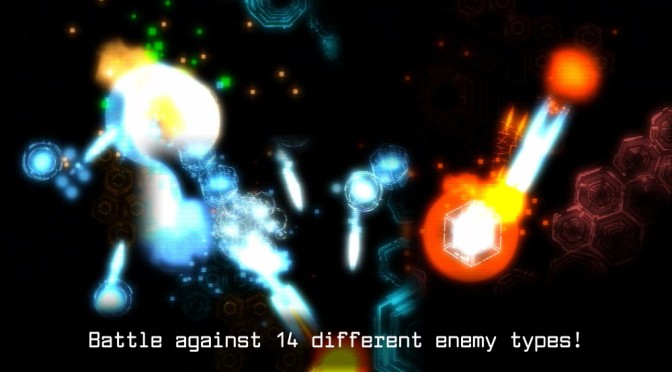 Past the visuals, which show off environments comprised entirely of hexagons, Smatter (80 MSP) reminds me specifically of radiangames’ Inferno. Both are twin-stick shooters with an affinity for circles, both employ a sparse yet evocative style, but they also contain a similar idea; working fast and aggressively to take down larger enemies to avoid being overwhelmed by the smaller ones they spawn. A Tactical Shooter, in other words, instead of simply shooting everything in frame.

Levels (13 in all) are more maze-like than straightforward, and can be obtuse to start, shrouded mostly in darkness until you approach and ‘feel out’ the boundaries. Every stage contains a number of individual cells, closed off areas accessible only through warp gates or locked doors. A minimap in the top left corner greatly improves that navigation, showing you said warp points and enemy threats, big and small. Despite the implied complexity, though, you’ll follow a mostly linear path. Clear the way, then move on. Bombs, EMPs, health, and keys can be discovered along the way in hidden rooms, provided you punch the corresponding switch. Some of those are found out in the open, others hidden behind enemy spawners. This is where the ‘twin-stick’ comes in.

Part of the beauty in Smatter is that you can play in two different styles— the ‘slow and steady wins the race’ way, hoarding your health, or the more rigid, challenging line to the exit that rewards tactical elimination of the ‘spawners’, placing them above the far more numerous ‘smatter’ they create. Call this style Mind over Smatter, and chuckle at your own invented cleverness. I did. And it’s more than a (s)matter of tactics. Yes, your survival (and progression) depends on the elimination of everything within a given stage, though real ‘progression’ is determined via a novel (and confusing, after you’ve read my explanation) ‘combo system’ for handling the scoring.

The basic gist is how many smaller enemies are destroyed between ‘spawner’ kills, and in keeping their numbers low in that interim. The counter below your total score represents a multiplier. The higher the number, the better you’re doing. Biding time and wiping out too many ‘smatter’ will decrease that number. Thus, being aggressive is generally the way to go, as killing anything gives you energy to use a focused or wide fire to quickly dispatch the stragglers and / or miniboss types, before they can overtake you or reduce your multiplier to zero. Doing so raises your score and awards badges at the end of the level (only used as a visual distinction on the leaderboard, higher scores still determine your placement). 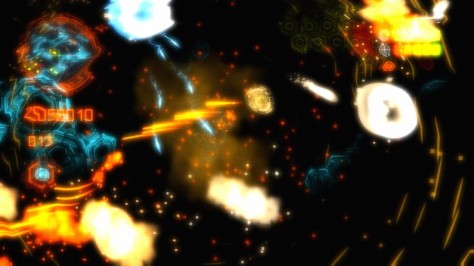 Hard to tell in a still shot, but this is you winning.

It’s all in knowing where to strike first, moving from one ‘spawner’ to the next, opening up passages where applicable to restock and heal. Using bombs and EMPs also come down to timing and the situation, often the difference between a high score and merely a passable one. Replaying previous stages is encouraged to familiarize yourself with the layout / most optimal run, and results in improved scores, which will of course make you the bigger man in the eyes of the global leaderboard.

Thanks to an intelligent scoring system and smart design that favors finesse and demands skill, Smatter gives more meaning to the twin-stick genre than you’d expect. Its controls are spot on, the visuals polished to a sheen, with no real faults to speak of. Well worth your time and currency.