The original Dead Sea is notable for two reasons. The first is one of the creepiest-looking men in videogame history (thankfully devoured by sharks in the opening cutscene), and two, it features a woman in a bikini named Shelly, doggie-paddling her way to safety in those same shark-infested waters. An interesting concept, but it was a terrible, QTE-style game otherwise. Brave Men Games should have cut its losses and let sleeping sharks lie. It didn’t. Thus, Dead Sea II: Mutation (80 MSP).

The sequel takes the idea in a completely different direction, plucking Shelly (and her bikini) out of the water and dropping her into a quasi-Resident Evil (lots of dead bodies, stiff controls, diary / journal entries just left laying around) ‘Secret Lab’ somewhere in the middle of the sea. It seems the men in the facility have mutated into sharkmen… wearing pants, the result of an experiment to create supersoldiers gone awry. Now they stalk the halls with a taste for blood, yada yada, and once they’ve grabbed you, your head is lunch.

You can counter this, somewhat. The QTEs from the original game return, conflated with a baffling stealth mechanic. While you find a knife early on, there isn’t any actual combat in the game. Instead, you’ll need to watch the patrol routes of the sharkmen in each room, then sneak up behind them and stab. Moving too early or botching the approach results in them chasing you before entering into a QTE to temporarily stun them and escape. Theoretically.

The problem begins with the entire idea of moving stealthily. In the crouched position you’re required to use, you’re naturally slowed. The sharks, however, continue to walk at normal speed, pausing only briefly in their routes before moving to the next point, making it virtually impossible for you to match their movements and pounce without alerting them. The QTE stun moves are a pain as well, leaving you only a split-second to press the right button (it alternates with each attack). Couple this with a stuttering framerate and a bad camera around corners, and you’ve got a recipe for unnecessary frustration. Probably not what you want to base the whole of your gameplay on.

More times than not, though, you can simply wait for an opening and run past (yes, it’s neither pretty nor sporting). This would seem to be the best policy until you reach a quandary about six or seven rooms in, where you’ll encounter a locked door, only to be told your salvation (read: keycard) is laying on a body… back in the cafeteria. Which is the same cafeteria you’ll remember from the beginning. 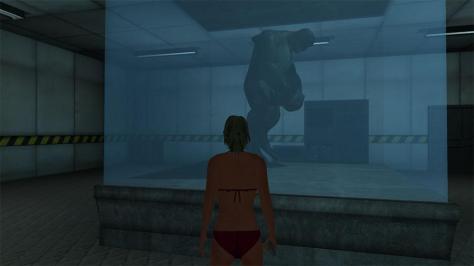 The intention seems to be a very large middle finger to the audience and a completely dirty trick to extend the length of the game. Oh, so you really expect me to be a trouper and trek all the way back through that shark gauntlet to retrieve a keycard I should have been able to pick up from the start? …Fine, I’m miserable enough already. There and back again, initiate a self-destruct sequence while being chased, dodge more sharkmen, and you’re done, one of the worst hours you’re likely to spend as a gamer. Nary a redemptive quality to be found.

Any pair of rose-tinted glasses, any angle you choose to view it from, Dead Sea II: Mutation is a travesty in digital form. A trap waiting to be sprung, a bad idea that should have never gestated into reality. Unfortunate as that is, and all its issues aside, let it serve as a reminder to other developers, a template on how not to make videogames.