With XNA and XBLIG as a brand on perpetual deathwatch, even those that haven’t abandoned the service aren’t expecting much in the interim between here and demise. Turns out that obituary is premature, and the reports of its death have been greatly exaggerated. There’s plenty of ambitious projects still coming down the pike. Ladies and Gentlemen, this is Astralis.

The simplified version of events would be to label it action / adventure. Yet one look at the above trailer tells you Astralis doesn’t do anything simple. Open world shooters are rare enough on the service, let alone one with a dynamic weather system, a distinctive look, and a respectable 3D camera (action is over-the-shoulder) that doesn’t get in your way when the proverbial shit hits the fan.

You play as the Commissar, after your ship makes an unscheduled detour on a backwater planet called Tellaryn IV. And there’s little doubt the patch of ground you’ve crash-landed on is a hostile environment. The wind kicks up debris, storms swirl in and out. The real threat is more physical, of course, and the Commissar will make use of a diverse set of weaponry. This includes your typical shotgun and assault rifle variants, a sniper rifle for ranged encounters, but also ups the explosives and tech, adding grenades and a plasma rifle. Combat is the primary focus, with numerous alien monstrosities on which to test those weapons.

Playing in an open format means doling out missions, and various NPCs around the world will fill in story gaps and volunteer you to complete their dirty work. The Commissar looks to have choices in those conversations. You probably shouldn’t expect ‘Mass Effect levels’ of depth and character growth, but it’s still nice to have the option instead of blindly clicking through text to skip ahead. These slower moments, paired with exploration, should compliment the shooting nicely.

Astralis is still a few months off, yet it’s impossible not to be excited by its potential. It’s certainly going bigger and bolder than your standard XBLIG fare, and I have every confidence the guys at Foxhaut Games will pull off something great with the material at hand.

You can track their progress and get the latest media by liking their Facebook page. 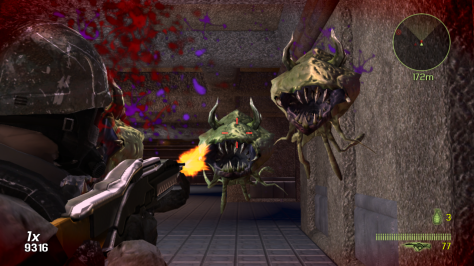 19 thoughts on “Ladies and Gentlemen, This is ‘Astralis’”