If Bulkhead (80 MSP) seems familiar while playing it, you’re a brilliant detective that’s onto something, as it comes from the same developer behind another unique but flawed first-person shooter, Vampire Slayer. Here too, the standard Deathmatch formula is altered to create a hybrid experience, and again, it’s for the worse.

Bulkhead is playable online or offline with up to six players (or five AI) competing to capture an alien artifact. Kill or be killed is the obvious fact, though your chief objective is to search the multi-leveled station’s plethora of containers. This builds a certain tension, as you’ll need to stand in place for a few seconds waiting on a percentage unlock for each box. Mostly you shuffle from one room or hallway to the next and scan again, trading fire with AI or human opponents along the way. Once you’ve lucked onto the artifact, the sirens go off and you scramble back to a certain-numbered airlock to await a short countdown before extraction.

From the HUD wrapping its pertinent text around your ‘helmet’ to the general sense of isolation and emptiness of being in space, the game looks and feels like a sci-fi shooter. This part it gets right. It’s rough around the edges, has rigid controls that get better as you go, yet in all the necessary ways and boxes you can check off, Bulkhead is a first-person shooter. And a bland one it would be, aesthetics and excellent lighting aside, if it didn’t try for something different. Given the setup: a derelict spaceship, unknown cargo, a recognizable audio cue warning of approaching danger, the game has that classic, stuck in a tin can, ‘Alien’ vibe. It’s laughably ironic, then, that the very inclusion of an alien into the mix as a wildcard is the game’s downfall.

Searching the containers here is like rummaging through a box of cereal; you set out with the best intentions to nab a cheap prize, but occasionally you unleash a monster instead (…yes, bad simile). For every container that yields ammo or health or… nothing, there’s an equally good chance you’ll let out an ‘alien’, a rather diminutive facehugger / crab-type that loves to immediately kill you and blends almost too perfectly into the environment, so you’ll sometimes never see it coming despite said audio cues and HUD warnings. 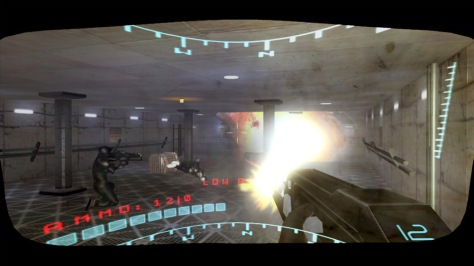 To make matters worse, the little bugger is surprisingly resistant to your available weaponry, including the RPGs you can find among the scattered containers. Not that we all should look to ‘movie rules’ as a legitimate gauge for effectiveness, but typically, toting an RPG and making use of said RPG has resulted in whatever problem one was faced with as being ‘resolved’, terrestrial or extra-terrestrial in nature. I’m not saying an alien lifeform wouldn’t have a tougher skin / more fortitude than a human being, I am saying two shots from an RPG should be enough to take anything down.

That it doesn’t is just another strike against Bulkhead, with the derivative combat and boring artifact search (ten minutes turned up nothing in one game I played) locked in as the only current option. Your dollar might net you some enjoyment, but I don’t see anyone lasting more than an half-hour with this before moving on. Much like Vampire Slayer, it’s a game with an idea that’s just not properly executed.