Most arcade titles possess a simple charm. They can operate solely around the same core mechanic or element, loop in repetition and / or challenge, toss in a high score counter as a measuring stick, and call it a day. Tremendous successes can be had from the smallest and unlikeliest of ideas. King Swing (80 MSP) realizes as much, and attempts to harness the untapped excitement (?) of a big hairy mammal swinging from outcrop to outcrop, avoiding the piranha-infested waters below.

There are three modes present. Endless (a set amount of lives and unlimited ropes), Time Attack (you’re given one minute to get as far as you can), and Ropes (ten swings to cover as much ground as possible). The options are appreciated, though all three settings boil down to the same formula— swinging for distance. Oh, Endless mode sports a bird you can hitch a brief ride on. Day and night versions of the same stage exist. That’s the extent of King Swing’s variety. Which, as an arcade game, would be fine, though beyond the first few minutes of gorilla-ian intrigue, the novelty of swinging begins to show cracks.

Your momentum while transitioning, too, is easily broken. It’s not terribly hard work to get swinging again, although the overall flow does suffer for it. And in a game built entirely on movement speed, it’s troubling to see yourself punished time and time again for going fast. The more speed you have behind you, the more likely you are to miss a rock or find yourself landing in a ‘no man’s land’… er, ‘no monkey’s land’, of open space with no nearby grips. I almost cringed whenever I got decent speed or height on my swings, knowing on the way down I’d have maybe one or two quick chances to latch onto a cliff before hitting the drink. 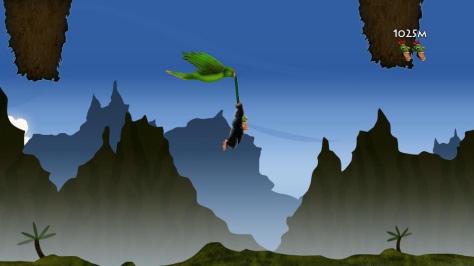 Nature doesn’t work this way, but it’d be cool if it did.

This kind of counter-intuitiveness will keep most players from immediately enjoying the game. Yes, your swinging skill and distance achieved will improve the longer you spend with it, though the absence of any lasting thrill or additional wrinkles to the gameplay hurts its longevity. To be fair, there are global leaderboards for each mode. This extends the game’s worth far longer than it would have without them. Still, it’s hard to get too excited over climbing the lists when the reason for being there has worn out its welcome so quickly.

Strictly speaking on the content, King Swing feels like a proof of concept idea more than a completely fleshed-out release. I’d imagine this eliciting a few chuckles on someone’s smartphone, something to dull the wait for a bus or train, but on a console, its lack of any real meat is glaring. The simplistic charm doesn’t hold up. As such, most everything that can be gleaned from the game can be accomplished in the span of its eight minute trial. I’d start and end with that.

Review on The Indie Mine