It was back in November that I reviewed Shark Attack Deathmatch, quite possibly the most polarizing review I’ve done yet, if the comments were any indication. Long story short, I didn’t like it, though I made a promise to revisit the game once it had been updated. Which it was… in December. I’m a bit late, to say the least. Various events and issues have conspired against me since then; time (as always), running this site, constantly having to move on to the next game in an effort to stay current, real-life commitments, etc. That’s not an excuse, but simple fact. Plus, I’m a big boy, I don’t have to answer to you.

The top menus and interface have been cleaned up a bit, now slightly more polished and easier to navigate, but the major addition to Shark Attack Deathmatch since I last saw it is the Romanesque ‘Pearl of Atlantis’ map and its resident evil zombie sharks. Solo Survival is ‘better’ with the patch, which gives a boost to speed and cuts down on reloading time. Though despite making modest gains on my records for each map, Survival still doesn’t look to hold anyone’s interest for long. It needs more options, either weapons or online co-op. Both, even.

As for multiplayer, my biggest beef with SAD was in its rapidly-depleting oxygen, inaccurate crosshairs, and the general speed of your shots. I felt it needed to be more ‘arcade-like’ and less ‘sim’ to be fun. The patch has addressed these critiques. While it’s still necessary to ‘lead your opponents’ in order to land hits, it does seem to be a little more forgiving. Knife fights are the norm (every match I joined had at least one guy that relied solely on melee), but you can hit targets from mid-range if you work at it long enough. The pace of the game has sped up as well, thanks to those aforementioned tweaks, with less trips for oxygen in between. 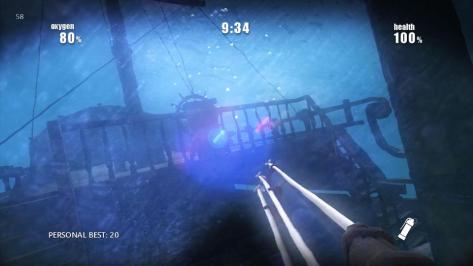 So, the question is, does Shark Attack Deathmatch now do enough to get a recommendation out of me after three months? Yes, mostly. It’s still a bit too luck and / or connection-based (P2P is usually sketchy) to be my regular cup of tea, though it has been much improved since the initial review. That’s just my shifting opinion, of course, you are entirely free to judge the game on your own. What’s more, there’s still a moderate online community playing the game, so even if you’re a late-comer, you can likely find a few matches. Happy hunting.

For future updates / community gatherings, or to submit feedback to the Devs, you can follow Lighthouse Games via the game’s Facebook page.

One thought on “The ‘Shark Attack’ Redemption”