Yeah, okay, I know. I bet you’re really surprised. Another zombie wave shooter, and of course I’m at the concession stand, popcorn and a ticket, please. To be honest, I’m not sure how I end up in these predicaments myself. Zombie Splatter (240 MSP) does zero things new, and never even considers straying from the preset formula of walking dead and purchasable weapons. Why give it a mention? 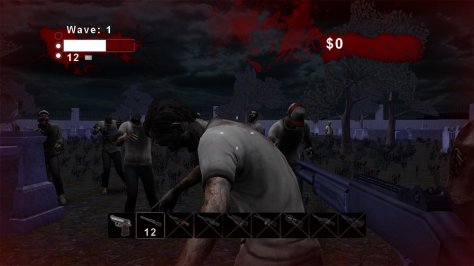 Originally, that question was answered with the game’s zombies. These shamblers are the prettiest bunch of brain eaters I’ve seen on XBLIG. The models are detailed and varied (there’s actually visual differences between them), and animate better than any other game’s version of the dead dance. It’s bothered me of late how many developers have put so little time into making their ‘star attractions’ believable zombies, recycling the same style throughout and using as few frames of animation as they could get away with (the ‘sliding’ zombie is the worst; Yeah, Quarantined, I’m talking about you).

However, rather than insert new types of enemies as the waves proceed, Zombie Splatter subscribes to the 28 Days Later school of thought that a faster zombie is a better zombie. Within reason, sure, I’ll agree, though the game tends to accelerate its zombies to ridiculous speeds, having them sprint around the arena like rabbits in the higher rounds. And then there’s the issue of them possibly being suicidal; the quicker zombies will sometimes run into walls and off themselves, or just collapse (re)dead in the middle of the arena. Hmmm. Curious.

Extinguishing zombies and gaining multipliers (by avoiding damage) gives you money that you spend on health and ammo between waves. Besides the starting pistol, eight weapons are on sale, including the requisite shotgun, assault weapons, and sniper rifles with scopes (seriously, is there a preset list of guns that everyone uses?). Though here too, the game decides to develop a quirk, perpetually locking me out of using both the shotgun and P90, despite having permanently purchased them. Even stranger, the next time I booted up the game, the rest of the guns after the P90 were magically unlocked and available to me (!?). Still no dice on the other two guns, though. Hmmm. Curious-er. 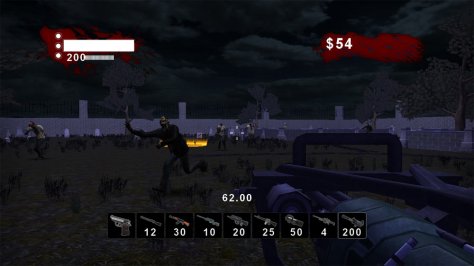 Beyond those bizarre happenings, it’s just not very fun once you’ve unlocked all the guns. ‘King of the Hill’ is okay for a secondary mode, tasking you to stay within the yellow rings to score points (money), but the game handles it all wrong, tracking your time survived instead of using that concept of time against you. There’s no penalty for leaving the circles; in fact, it’s encouraged to chase down ammo crates that occasionally drop. Given that you’re already fighting off zombies in a small, usually wide-open space, why not add a timer to things, forcing you to stay inside their boundaries to stop the clock, asking you to trade off between ammo necessity and precious seconds? It’s a missed challenge…

…in a series of misses, some near, others far. All said and accounted for, I cannot recommend Zombie Splatter in current form. The price is higher than it should be ($3 for one tiny square arena? Really?), and the weapon / enemy woes and ‘small potatoes’ offerings only make it all the more obvious its appetite exceeds its reach.