In the recent spate of zombie wave shooters to be released, which has seen five games built around the concept in less than two weeks, Sick Kreations‘ End of Days: Survivor (80 MSP) still manages to be more of a surprise and anomaly than the others. Up until now, I’d been previewing Aliens Vs. Romans (also from Sick Kreations), what I had thought to be their next project. And though this game might be meant as a tide-you-over until Aliens Vs. Romans (itself poised to be a wave shooter), it instead runs the risk of souring some gamers’ expectations. 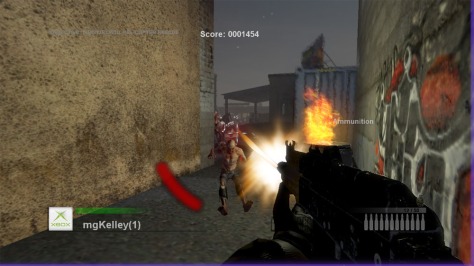 Both zombies and wave shooters have seen their worth stretched before, but Survivor is a case of recycled materials. It takes the map from the developer’s previous effort, Infected Vs. Mercs, and drops two of the larger aspects that made that game a fun and replayable shooter; online play and leaderboards. It does feature a host of score-based unlockable weapons (that are all curiously light on ammo and capacity), though in substituting the undead, it finds itself sandwiched between doing too little and just enough, satisfying the trendy crowd with the fatal expense of ditching key components.

The game runs a total length of 20 waves, but it’s the bonus rounds that hit every three waves that are easily the most enjoyable points in the game. You’re handed a grenade launcher with unlimited ammo, each shot of which sends the zombies flying in all directions. The round doesn’t end until the timer runs out or you die. It’s fast and fun, and should have been the kind of quickened, arcade gameplay the rest of the waves strived for. Alas, it’s not to be. 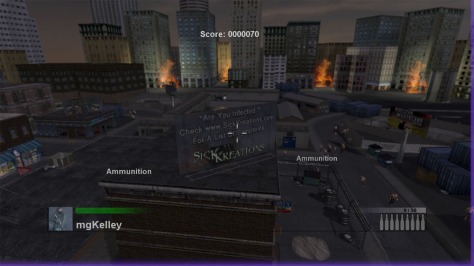 It doesn’t help that the zombies skip out on intelligence and run en masse to your gun, relying on their numbers and you catching an odd corner or dead end to provide challenge. Failure doesn’t mean failure, either. If you die, you simply pick up where you left off, no penalty. In fact, the biggest challenge in End of Days: Survivor is simply to survive the boredom that sets in, as outside of the bonus rounds or unlocking a new gun, each wave plays out the same, with you running around, refilling ammo far too often, and shooting one nondescript zombie after another.

The helicopter sequence at the end is a just reward, but as a wave shooter, End of Days: Survivor loses the player’s interest far too quickly. Once you all unlock the guns (twenty minutes or so), they remain accessible for that playthrough, eliminating goals and turning wave progression into a lifeless chore. Coming on the heels of so many others, which sees those games doing the same thing but better in certain instances, it fails to impress. All of its parts are in working order, and the developers do weaponry particularly better than most, but I’ll admit my anticipation for Aliens Vs. Romans had dulled a bit. This should have been an add-on to the existing game. Try harder, guys.