With a mouthful like Zombie Strippers Stole My Heart Then Ate My Brains (80 MSP), you can be guaranteed of two things; you’re not in the land of highbrow setups anymore, and naked zombies will factor prominently into the gameplay. True enough, if you’re certain you’d do well in a real apocalypse and you suffer from an addiction to ladies in a constant state of near-undress, ZSSMHTAMB will surely scratch that perverted itch of yours with zero apologies.

The story is a trifle about security guards working a convention for the recently de-clothed (‘Stripper Con’), who happen into the epicenter of the zombie apocalypse. There’s some dialogue between stages that elaborates on their situation (the voice acting runs from boring to cheesy), though the focal point is clearly on the convention attendees and sending them to the after-afterlife. You’ll start off with a pistol and work your way up from there. Each round contains limited ammo (you’ll never run out; there are always random drops to find), and all of the action takes place in a single medium-sized arena, fighting through 20 waves of girls that were formerly just trying to pay the bills.

Unfortunately, the game’s commitment to boobs can only carry it so far before it gets tiring. It succumbs to its own machinations, namely the vaunted variety, which boils down to the same gig that retail games love to put the player through; the helpless NPC that needs to be defended while he / she completes an objective. In Zombie Strippers, that character is Jake, and while his health is low and his waves tend to be the most frustrating, they are a necessary evil, as Jake is the procurer of all things dealing with weaponry. Those shiny, fully automatic solutions to the walking dead that are locked away at the beginning? Protect your pal for a few rounds, and you gain access to those guns one at a time.

This could have been the end for the game, but luckily the difficulty never strays far from ‘shooting gallery’ levels of challenge, even when new zombie forms (severed torsos, and an acid-spewing type) are introduced. While Jake will surely manage to get himself killed a few times, it’s easy enough to continue (wave progress is saved) and stick with it, especially with the promise of new guns just over the hump. From a stronger handgun to grenades, to an LMG that skips lengthy reloads entirely, these unlocks are perfectly suited for the larger crowds you’ll run into. It’s not hard to fathom then that stocking up on ammo and cutting loose is the pinnacle of the game’s fun. 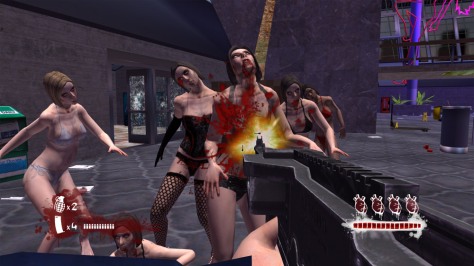 A few other issues crop up. Zombie spawns are a tad sketchy at present, and can assemble an army behind you (yes, even after you’ve cleared it) without notice if you’re not careful. And though hit detection is mostly fine, the same herky-jerky controls present in Paintball War persist here. Adjusting the sensitivity works, though it’ll still be a complicated adjustment for some. On the plus side, there is the promise of online co-op coming eventually. As the adage goes, ‘Never fight undead strippers alone’. If you have a friend, it’s something to look forward to.

Even with copious levels of skin and a formidable arsenal with which to eliminate the undead, Zombie Strippers Stole My Heart Then Ate My Brains rests squarely in the ‘not good, not bad either’ category. It has some fun, and you’ll easily manage a dollar’s worth of entertainment out of it, but Strange Games Studios will have to change things up for the obligatory sequel if they want to keep my business.

7 thoughts on “REVIEW: Zombie Strippers Stole My Heart Then Ate My Brains”