Mingling music, extra-terrestrials, and classic literature, and despite whatever else you can and will say about it, FromPulse (80 MSP) is an ambitious XBLIG with many moving parts. Those parts also utilize the Sunburn engine to great effect, so of course the production values are high compared to other games. It joins the short but growing list of indies that could pass for XBLA.

Focusing on the story of a boy named Vegah and his people, the Ollopas, it presents aliens who quite actually breathe music (the game splashes electronic dance tracks over everything), a plot about discord, invasion, and time traveling, with more than a dash of literary paint on its brush. I mean, it references and quotes lines from Rimbaud, among other writers and works (Alice in Wonderland and Animal Farm, to name a few), and how many times in your life can you expect to say that about an Xbox Live Indie Game? Answer: not often.

Though at its core, FromPulse is a rhythm-based platformer that requires you to press or hold buttons according to the color of the beat. The bit about time traveling, Vegah is asked to return to various ‘themed’ periods in history, to hunt down an instrument capable of saving his race. So on and so forth. This is really just an excuse to get you tapping once the music starts. All four of the face buttons get in on this act, but never all in one level. The difficulty is kept low (I never once failed a stage), deliberately, I think, to let anyone and everyone enjoy the game.

Hitting the notes perfectly (a little tougher than you’d think) is the most ideal, and builds your heart meter. You do get partial credit for landing on them early or late, while missing the mark will subtract a heart from your total. At the end, your score is tallied. You can still complete the stage with just one tick left on your heart, but more hearts equals more story, which tracks Vegah’s conversations with the human representatives he meets in each new timeframe. Finish the stage with all five hearts filled to the brim, and you see the whole exchange.

These ‘conversations’, without context or a love for the classics, will probably seem like gibberish to most, and do little to advance ‘the main plot’ centered around Vegah’s homeworld and its invaders. Ending with a full heart meter also gives you a working QR code to scan with your smartphone, either to play and download the game’s great tunes, or to (in Story+) read the references cited for that level’s ‘story’, which is a very nice touch for those interested. 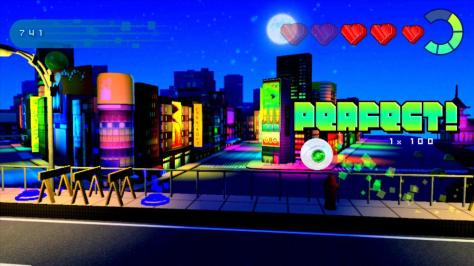 The game is only four stages long, with two teasers for levels that presumably were cut due to issues with time. Story+ (unlocked when you beat the original story) repeats those same four stages, sped up to FTL speed and resulting in a game over if you lose all your hearts. Completing this gives you a single-screen ‘non-ending’ that offers no resolution and an always-irritating-to-see ‘to be continued’. Clearing both story modes will probably take you under an hour, and there are some hiccups I noticed with the game’s engine, like sluggish frame-rates, resulting in a few missed or ill-timed notes, but it’s nothing that’ll ruin the experience.

It’s inarguably worth the 80 MSP, but I do hope the guys at Pixel Molotov add to it as suggested in an update. FromPulse waves its creative flag proudly and dares to do different. It shoots for the stars, literally and figuratively, and falls a little flat in summation, but its ideas and attention to craft (over trends and cash-ins) reaffirms my commitment to the service and independent game design as a whole.