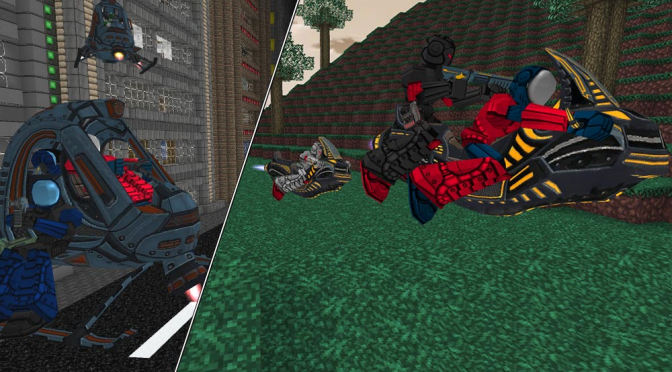 I’ve mentioned it before; I’m not a fan of developers asking their audience to buy a product before it’s ‘finished’. It doesn’t make the review process easy, either, putting it on me to judge an incomplete product that could make a turn for the better or for the worse after I’m done with it. Murder Miners (80 MSP) is an FPS that readily admits to being in Beta form. It makes everyone who plunks down the dollar (originally, and when I bought it, it was 240 MSP…) an unofficial tester, basically asking for our trust and money, in advance, to maybe (they’re under no obligation, after all) build a more complete game in the near future.

Enough with my pessimism though. The game aims to recreate the look and feel of the original Halo, albeit in block form a la Minecraft, with up to 20 players online. Why try to mimic one beloved franchise when you can mimic two beloved franchises, am I right? There’s a huge risk involved in this, besides the inevitable jeers for the lack of originality, as you’ll need to be pretty on point with your controls and and gameplay to pull it off. The remarkable thing, is that JForce Games has succeeded in doing just that, crossing the two series’ styles and coming out (relatively) clean on the other side.

Ignore the single-player for now, which consists of a woefully-done ‘Zombie’ mode. There’s too many at once, they move too fast, and hit too hard to be any kind of fun, solo or with friends. The best you can say for it is the Devs do plan on tweaking the whole thing to make it (conceivably) more tolerable, adding new maps to the list, and actual breaks between rounds to build fortifications and plan an attack. 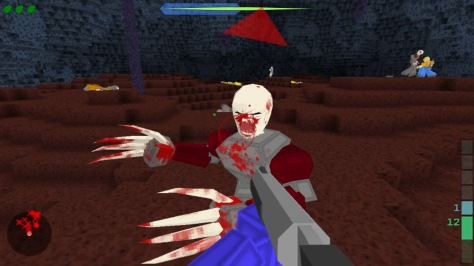 Multiplayer is your ticket to ride. For now, it offers up the standard ‘Deathmatch’ and ‘Team Deathmatch’ varieties, the aforementioned ‘zombies’, and ‘Design Mode’, that gives you and your friends carte blanche to modify any of the current levels or construct a whole new arena, using the aptly-titled miner gun. It constructs, and conveniently doubles as a powerful weapon when called upon. You’ll also get the usual suspects— shotgun, machine gun, sniper rifle, pistol (some of them even have alternate fire modes, press B). When enabled, the destructible / reconstructible environments not only look neat (each block reacts differently to damage), it can alter the playing field. There’s certainly enough maps (10+ in-game, with the option for unlimited ‘new’ levels via the editor) and block types that you’ll never want for new creative avenues, although there are plans to add on to the available tools and maybe a weapon or two.

So how does it play? Really well, to be honest. The controls feel great, the weapons deal damage in credible proportion, and the frame-rate rarely dips or sputters. It’s quite balanced and fun. Due to its crafting options, each match is almost an experience onto itself, with half the players gunning for kills, the other half constructing walls to shield / hide themselves, placing jump blocks to access higher recesses, or even amateur house construction; I stumbled upon a guy building his dream home in a forgotten wing of the level. Had to put him down (this is a shooter, you know), though his place looked nice. Good luck in the hostile housing market, buddy.

Don’t sleep on the pistol. It packs a punch.

There is some visual personalization, in that you’re able to customize your helmet type and armor coloring (guys, the Spider-Man thing is cute, but enough already), with the promise of additional helmets / armor to come. While the game doesn’t feature unlocks or a leveling system, I would like to see some persistent stat-tracking. At least a general K/D tally, but I’ll take more if the Devs are willing. Updates don’t look to be a problem.

As a beta for a Halo / Minecraft amalgamation that’s off to a running start in fun, with a glimpse at something greater, there’s no shortage of promise. You can lose hours to the game just in tinkering with the crafter, and even more thanks to the solid online play. I can’t review the future, but I can give you an enthusiastic interpretation of the present; Murder Miners is worth your MSP now, and worth your MSP to see where it goes, absolutely.