Sententia (80 MSP) is an art game, and even if it gets nothing else right, it doesn’t apologize for that fact. Nor should it. Whenever anything in the interactive medium tries for something more, either by pushing an esoteric theme or taking its gameplay on a road less traveled, I tend to get defensive, exalting the tiniest details and forgiving (or even neglecting to mention) the bigger faults.

Sententia is one of those times I’m tempted. I truly did enjoy the ‘idea’ of the game, which charts the life of a ‘special creature’ from child to adult, armed with the foreknowledge that he can create his own path through the world. In dialogue and occasional quotes, it touches on issues we’ve all pondered at some point, specifically in never forgetting your youth or imagination, and fighting for what you believe in. It has its moments. It also has some glaring issues that cannot be swept under the review rug.

An odd mashup of styles, the game alternates between its story / existentialism, platforming / light combat, and puzzle-solving via single-screen ‘stages’. In a twist, you ‘fight with words’, using them to defeat adversaries, and they you. The puzzles in the game are platforms that must be linked using your ‘imagination’, matching the number of ‘connections’ shown on each node. In theory, you see, this should be a good game. Once in action, though, it quickly goes to hell.

The problem starts in the clunky puzzle ‘building’; placing links is mostly fine, but removing connections can be a hassle. Rather than a toggle, there should have been separate buttons for each function; the middle steps are slow and unnecessary, breaking the momentum. When I’d rather quit to the menu to redo a puzzle than manually-deselect each connection, it’s a problem.

Then came the ‘punishformer’ jumps and disappearing platforms, often forcing you to leap from the exact edge of a disintegrating block in order to be successful. Other steps you find are simply illusions, leading to countless deaths as you trial and error your way into ‘learning’ the correct path. As if that wasn’t bad enough, you’re usually under fire from hecklers during these tougher slogs. You can now multiply your countless deaths by ten, all due to the terrible enemy layouts, their heartless AI, and their constant, cheap respawns.

After all that (and if you’ve stuck around), add to this a final puzzle that offers no hints as to its solution, no previous example in the game on which to base its logic, where I had to sheepishly ask for help (a sincere thanks to Tristan at Clearance Bin Review) in order to finally move past it (see comments below for help), and you’ve got a game that wasn’t ready for publication, let alone a prime spot in the Uprising. What you’ve got is a twenty-minute concept that stretches out to an hour or more because of bad design. 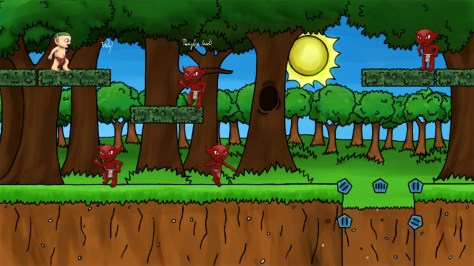 Games are and should be a passion first, but they are also a product. High Concepts and putting your heart into a project are great, but they can only take you part of the way. Fun and proper balance have to do all the heavy lifting, or your idea, as sound and unique though it may be, will buckle. Sententia is the result of placing too much burden on an idea.

Review on The Indie Mine