Pixel is to be the first published game from Canadian developers Ratchet Game Studios. Pretty good to get yourself noticed and included in the Uprising with your debut, and given the game’s unique look and blend, it’s no surprise. I suppose my immediate reaction to it is Portal (the gun) crossed with the time trials from Mirror’s Edge (level traversal). The Dev doesn’t shy away from that first comparison either.

In this first-person puzzle/shooter you need to manipulate the environment to get from ‘A’ to ‘B’. Through 25 different levels, use different particles, taking different paths and be quick with a controller to perfect your skills to move on to the next level! Speed and ingenuity are key to mastering this game!

In saying that it combines its ideas with an established and beloved brand in order to make something its own, Pixel is holding itself up to a higher standard than flattery and me-tooism. While the similar look and mention of puzzles might have some saying ‘clone’ without hard evidence, the emphasis on speed and action versus a methodical approach, and the cel-shaded levels and multiple paths shown off in the trailer, put a lot of those qualms to rest. The final proof will be in playing it.

Pixel will be released on September 20th.

Interview at The Indie Mine 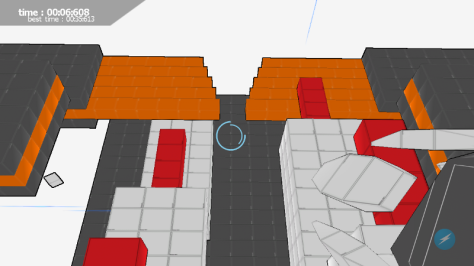 One thought on “Prelude to the Uprising: Pixel”