I would’ve demoed The 4th Wall (80 MSP) regardless, but when something looks this blatantly strange and gets all dodgy and interrogative, my involvement is a foregone conclusion. What lies beyond The 4th Wall? asks the marketplace description. Indeed.

A remake with better art and more content (the PC original can be found here, for the extra curious), the game could be described as a first-person ‘puzzle’ (the developer has coined it an ‘abstract horror puzzler’), but that’s not entirely truthful. The only ‘puzzle’ comes in the form of a maze, the rest boils down to trial and error and weirdness, so I had to go and create a new designation for the game— ‘Other’.

And unfortunately, I must invoke the first rule of Fight Club, as to talk about The 4th Wall is to spoil playing The 4th Wall. You’ll have to rest on brief and disjointed phrasing— exploring the white noise, a bleeding worm, a room constructed entirely of words, and eyes watching you.

What I will say is if you decide to give it a try, you shouldn’t suffer any bouts of boredom. I blinked twice the whole time. The continual ‘resets’ of the visuals keep you going, as do the questions. It’s wall-to-wall WTF. Maybe the bleeding worm is a metaphor for the state of the planet, or maybe I’m supposed to be the worm? Or the blood? Maybe it’s just a really long penis. Who knows. The 4th Wall isn’t forthcoming.

Nor is it scary, in the traditional sense. One or two ‘pop-up’ or ‘corner of the eye’ instances. Unnerving? You could definitely say that, mostly in the spatial relationships between you and the ‘screens’, how a much larger room can exist inside a smaller one. That part reminded me of House of Leaves, which (partially) explored the sudden occurrence of a constantly-expanding labyrinth in a family’s closet. That scared me, the idea of a place folding, shrinking, or twisting itself without pattern. Something like this would be worth a whole game on its own, were it properly managed and expanded upon. 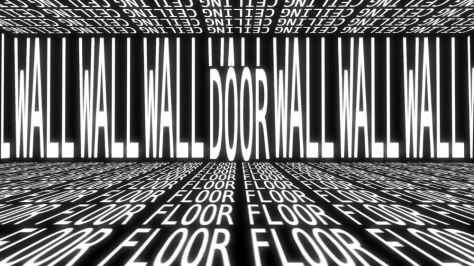 Exactly how my parents taught me things.

As it is, I won’t downplay the strangeness of The 4th Wall, which warrants a look if you’re into oddities, but I can’t call it a ‘buy’ either. Your time with it will probably run under an hour, mostly out of confusion and wandering, and there’s no real payoff. The ‘ending’ makes about as much sense as the rest of it. It’s a art house game, easily gathering a crowd to stand and gawk, some tension achieved, but with only the minimum in satisfaction after the ‘show’ takes its bow.